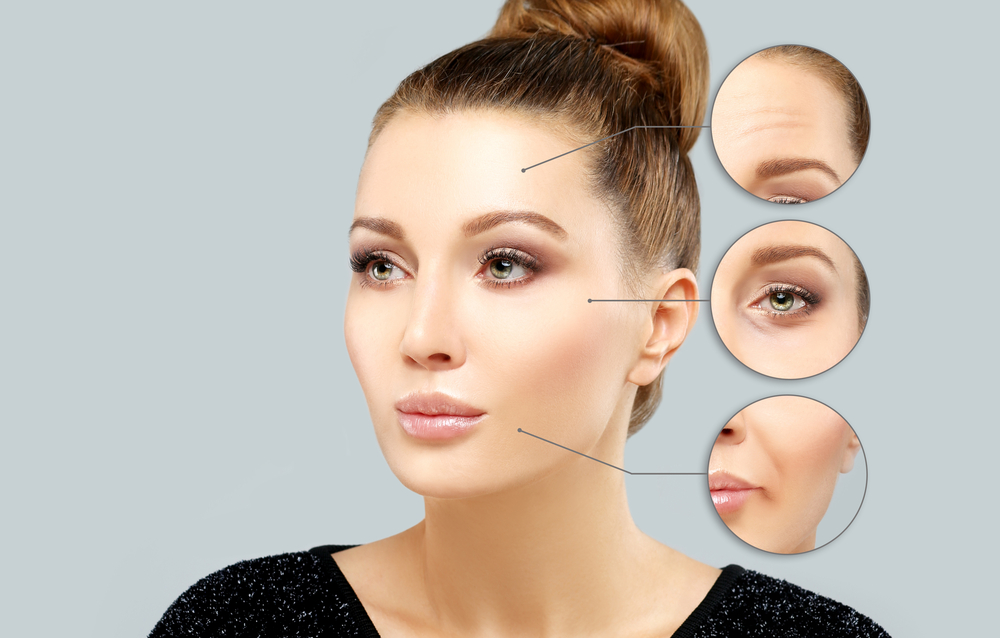 Anti wrinkle injections allow you to look and feel younger without the need for any invasive procedures.

As we age, the levels of elastin and collagen – the skin’s natural elastic and binding materials – begin to decline. This causes the skin to lose its suppleness and it begins to sag. As a result, fine lines and wrinkles develop. Botox® is a well-established and non-invasive treatment which is extremely effective in reducing the appearance of fine lines and wrinkles.

Non-surgical cosmetic treatments such as Botox injections could be a viable alternative to facial plastic surgery.
Forehead height and hairlines are different in individuals and patient with low hairline and short forehead and thus need to be treated differently from patients with a back-set hairline and elongated forehead.
The glabellar area is a common site for Botox injection because the lines between eyebrows might be visible at rest, or become visible on frowning.
Crow’s feet wrinkles can also be eliminated by Botox injections.
Bunny lines on the top sides of the nose are different from patient to patient and are treated by Botox injections.
Other parts of face can be treated by Botox injections, for example, the lower lids, mid-face such as, “lipstick lines”, nasal tip elevation, nostril flare, lines beside nose (nasolabial folds), jowls, facial asymmetry and facial excessive sweating (Frey Syndrome), chin and bands over the neck (platysma band treatment) in aging neck. Read more, facial Botox.

Botox® is the brand name of a toxin produced by the bacterium Clostridium botulinum. In small, diluted amounts it can be injected into areas of the face to reduce fine lines and wrinkles. It is an effective alternative to more invasive procedures, such as surgery.

Botox can also be used for gummy smiles, to help with bruxism (teeth grinding) and for the treatment of excessive sweating.

How does Botox work?

Botox® works by temporarily relaxing facial muscles. It does this by blocking the signal from the nerves to the muscles. The injected muscles can no longer contract as forcefully, which causes fine lines and wrinkles to relax and soften.

Where can Botox be used on the face?

Non-surgical cosmetic treatments such as Botox injections could be a viable alternative to facial plastic surgery. Botox is cheaper and quicker than facelift but it is temporary and needs top-up sessions to maintain results.
Crow’s feet wrinkles can be eliminated by Botox injections.
Bunny lines on the top sides of the nose are different from patient to patient and are treated by Botox injections.
Other parts of face can be treated by Botox injections include the lower lids, mid-face such as “lipstick lines” (which could be due to smoking, sun damage, familial factors, chronic whistling and playing musical instruments), nasal tip elevation, nostril flare, lines beside nose (nasolabial folds), jowls, facial asymmetry and facial excessive sweating (Frey Syndrome), chin and bands over the neck (platysma band treatment) in ageing necks.

Why did not notice any improvement in my wrinkles and fine lines after Botox injections?

There are several reasons for Botox injection failure, the most common is incorrect injection of muscles, followed by poor injection techniques and there are some very rare cases in which the body produces Botox-neutralising chemicals which neutralises the Botox in a short time after the injection. It is known that Botox does not work as well in men and people over the age of 65. In many cases, it seems that there is some misunderstanding between the patient and the Botox injector as the patient may wish to have complete flattening (paralysis) or simply a lessening of the movement in the upper face. During the initial consultation, no guarantee is given for the prediction of Botox’s effects as it is different patient-to-patient. Top-up Botox injection is given about two weeks after the initial injection. However, it is recognised that individuals seldom develop Botox-neutralising chemical (antibodies) after Botox injection. On the other hand, there is a school of thought which refutes this theory and argues that the rare cases of ‘non-responders’ to Botox could have been exposed to botulinum toxin through subclinical food poisoning during their life and have detectable neutralising chemicals in their body. These rare non-responders to Botox can be treated successfully by botulinum toxin B brands on the market. It is crucial to understand the difference in Botox and dermal fillers and they need to be fully understood by the patient at initial consultation. The patient should understand that deep wrinkles which are heavily imprinted to the skin might look better after Botox injection but they do not disappear completely. Furthermore, there are lines which are fixed in place and wrinkles (static) on the forehead, as well as frowns which are might become much softer with Botox injections but emotions & gestures using forehead and frown lines (dynamic) could completely disappear with Botox injections. Botox can be combined with dermal fillers to treat deep lines and wrinkles.

All options are discussed at your initial consultation with the aim of giving you a realistic, accurate outlook, including possible risks & side-effects, to help you make an informed decision.

Thought Botox injections were only for wrinkles & fine lines? Think again. Botox is clinically proven to block the nerves responsible for sweat production, providing lasting results for areas including the underarms, palms of hands & soles of feet. This treatment is excellent for those whose excessive sweating causes them body odour, embarrassment, discomfort & confidence issues. Book a free consultation today with one of our qualified practitioners today to see if you are suitable candidate.
Find out more

Let one of our expert team guide you through your skin journey. Book a free, no-obligation consultation for any of our treatments, or book a free skin analysis to better understand your skin and how you can improve its health. We will offer impartial, reliable advice and sign post you to the correct treatments and skincare regime, in line with your budget.